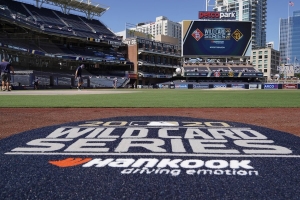 September 30, 2020 (San Diego) - The Padres started their first playoff run since 2006 with a best-of-three wild card series against the Cardinals.  Kwang-hyn Kim started for St, Louis against Chris Paddack.

The Cardinals got off to a hot start in the first with Paul Goldschmidt’s two-run homer to left.  Yadier Molina singled on a line drive to center to score Dylan Carlson and Matt Carpenter hit a sac fly to score Molina and the Cardinals led 4-0.

In the home half of the first, the Padres got on the board with Eric Hosmer’s sac fly that scored Fernando Tatis Jr.  The Cardinals led 4-1 after one.

In the second, Austin Nola hit a sac fly to score Jake Cronenworth and the Cardinals’ lead was cut in half, 4-2 after two.

In the third, Paul DeJong singled on a line drive to center to score Carlson and Carpenter did the same to score Molina and the Cardinals led 6-2.

In the home half of the third, Tommy Pham singled on a ground ball to right to score Tatis Jr. and the Cardinals were cut in half again, up 6-3 after three.

Nola got the Padres closer in the sixth with a sac fly double play that scored Pham.  The Cardinals led 6-4 after six.

The Cardinals added the finishing touches in the ninth with a ground ball RBI single to right by Dexter Fowler.  DeJong scored and the Cardinals took game one 7-4.