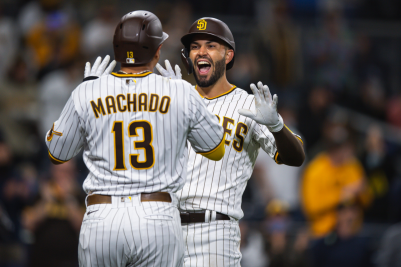 Photo: Eric Hosmer continued his fiery start to the season with three RBIs on the night. Via @padres on Twitter

April 2, 2021 (San Diego) - After a wild back and forth Opening Day yesterday that the Padres eventually won 8-7, both teams were back in action tonight for game two.  Merrill Kelly started for Arizona against Blake Snell.

The Padres loaded the bases in the second and Jurickson Profar hit a sac fly line drive to right to score Eric Hosmer and the Padres led 1-0 after two.

The Friars threatened more in the third with two runners on.  Hosmer launched his second home run in as many days with a two-run blast to right and the Padres led 3-0 after three.

Ketel Marte finally got the snakes on the board in the seventh with a two-run blast just over the left field wall and suddenly, the Padres’ lead was cut to one, 3-2.

Hosmer continued his hot start to the season in the home half of the seventh with a chopped grounder into left to score Tommy Pham and the Padres took a 4-2 win to secure game two and go 2-0 on the season.  They’re in first in the NL West.  Mark Melancon picks up his second save in as many games.