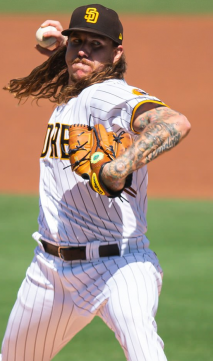 By Liz Alper
Photo:  Mike Clevinger via @padres on Twitter
May 10, 2022 (San Diego) - Last night was boring for us, but fun for the Cubs as they dealt the Padres their second shutout of the season.  The Padres tried to bounce back tonight against Wade Miley for the Cubs vs. Mike Clevinger.

Tonight, the Padres jumped out to the lead first as with the bases loaded in the home half of the first, Wil Myers singled to score Manny Machado and Ha-Seong Kim walked to score Eric Hosmer and the Friars led 2-0 after one.

The third was a wild one.  Alfonso Rivas tied the game with a two-run homer, but Austin Nola singled in the home half up the middle to score Luke Voit and the Padres led 3-2 after three.
Padres’ing allowed the Cubs to tie the game in the fifth after a pickoff throw from Nola missed Machado at third, allowing Rafael Ortega to score and we were tied at three after five.
So Machado sighed and regained the lead for his team again in the sixth with a ground ball double down the left field line that scored Jake Cronenworth.  Eric Hosmer singled on a ground ball to second that Jonathan Villar couldn’t field to score Jurickson Profa and the Padres led 5-3 after six.
The Cubs got one back in the ninth with Ian Happ’s two-out single to right that scored Ildemaro Vargas, but the Padres saved one game with a 5-4 win to even the series at one game apiece.
UP NEXT
Tomorrow’s matinee rubber game is at 1:10 p.m.  A pitcher to be named starts for Chicago against Nick Martinez.
TRANSACTIONS