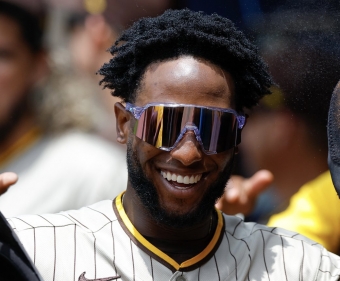 May 15, 2022 (Atlanta) - The past two games in Atlanta have been fun rides, with each team snagging one game apiece.  We would see who took the rubber match today.  Grossmont High alum Joe Musgrove started against Kyle Wright for Atlanta.

The Braves took the upper hand again first with Adam Duvall’s single in the second that scored Dansby Swanson and the Braves led 1-0 after one.

Swanson made his presence known again in the fourth with a two-run blast and the Braves led 3-0 after four.

The Padres got on the board in the fifth when Jurickson Profar scored on a pickoff attempt error and the Braves led 3-1 after five.

The Friars fought back in the seventh with a single from Wil Myers that scored Profar and a sac fly from Austin Nola that scored Myers that tied us at three and sent us to extras.

In the 11th, the Padres surged ahead to win, starting with a double from Ha-Seong Kim that scored Jake Cronenworth.  Profar grounded into a fielder’s choice to score Kim and Myers singled to score two and win the game 7-3 and the series 2-1.  The Padres are now in sole possession of first in the NL West.

The Padres get a day off tomorrow before continuing their East coast trip in Philadelphia on Tuesday.  First pitch is at 3:45 p.m.  Mike Clevinger starts against a pitcher to be named for the Phillies.