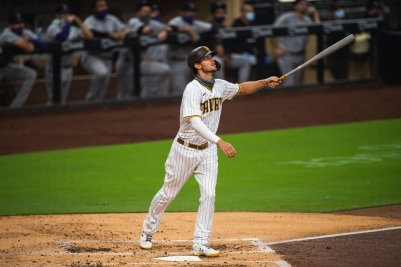 Photo: Wil Myers' grand slam in the first gave the Padres the lead for the rest of the game. Via @padres on Twitter

September 8, 2020 (San Diego) - After a nice walk-off win last night, the Padres looked to take the series against the Rockies tonight.  Chi Chi Gonzalez started for Colorado against Mike Clevinger.

Unlike last night, it didn’t take nine innings for someone to score.  Nolan Arenado blasted a three-run bomb to left in the first to put the Rockies up 3-0.

But after loading the bases in the bottom of the first and throwing ball after ball, Gonzalez just kind of...gave up (wouldn’t you if the ump kept changing the strike zone on you) and hit Austin Nola in the back to score Trent Grisham from third.  Former Padre manager Bud Black took the ball from him finally and gave it to Jose Mujica.  But the change was in vain; Wil Myers got the Padres back to their Slam Diego ways with a grand slam to right to catapult the Padres up to a 5-3 lead.  And all of this is only after one inning!

The Padres got right back to work in the second with Manny Machado’s grounder down the third base line that scored two runners.  Nola topped it off with a three-run homer to left center to counter Arenado’s and the Padres hit double digits, now up 10-3 after two.

The Padres added one more in the third with Machado’s grounder up the middle that was bobbled by Raimel Tapia.  It scored Valhalla alum Greg Garcia and the Padres led 11-3 after three.

The Rockies got one back in the fifth on Trevor Story’s fielder’s choice that scored Rancho Buena Vista alum Tony Wolters and the Padres led 11-4 after five.

Former Padre Matt Kemp tried to help the Rockies out too in the sixth with a line drive single to right center that scored Arenado to make the score 11-5 Padres after six.

The series finale is tomorrow at 5:10 p.m.  Antonio Senzatela starts for Colorado against Zach Davies.

Do you want to see more coverage of Padres baseball?  Please donate to support our nonprofit sports reporting:  https://www.eastcountymagazine.org/donate.