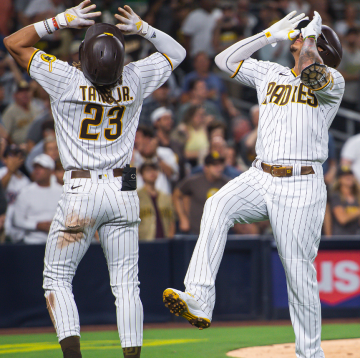 By Liz Alper
Photo via @padres on Twitter
July 27, 2021 (San Diego) - The Padres are back home and as much as they love the National League, they were ready to take a break from it for two days and welcome the Athletics for a short two-game series.  James Kaprielian started tonight’s game one for Oakland against Chris Paddack.

With the bases loaded in the third, Matt Olson hit a sac fly to score a run.  Jed Lowrie lined a single to left to score Mark Canha.  Sean Murphy hit a blooper double to right to score Ramon Laureano and the As led 3-0.

Fernando Tatis Jr. got the Padres right back into it in the home half of the third with an absolute blast to left, good for two runs and the As’ lead was cut to 3-2 after three.
But Jake Cronenworth saved the day with a grounded single to right in the fifth to score two and kick Kaprielian out of the game.  He was replaced by Yusmeiro Petit, who gave up a three-run line drive opposite field homer to Manny Machado and the Padres were catapulted to a 7-3 lead after five.
Murphy hit a solo homer to left in an attempt to rally in the eighth, but the Padres took game one with a nice 7-4 rebound win and move to 59-44.
UP NEXT
The rubber match of the short two-game series is tomorrow at 1:10 p.m.  Sean Manaea starts for Oakland against Blake Snell.  The game is also tomorrow's MLB.tv free game of the day.
TRADE NEWS
OTHER NEWS
TRANSACTIONS