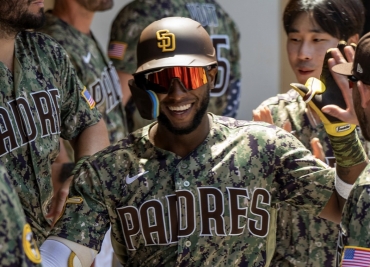 July 31, 2022 (San Diego) - The Twins evened the series with the Padres last night, both games of this series featuring big wins.  They both looked for a series win today with Dylan Bundy on the mound for Minnesota against Sean Manaea.

Jurickson Profar started the scoring with a solo homer in the third and the Padres led 1-0 after three.

But in the fifth, Luis Arraez hit a solo homer to tie the game at one after five.

The Twins took the lead in the sixth with a solo homer from José Miranda, but in the home half, Jake Cronenworth saved the day with a single that scored Trent Grisham.  Luke Voit singled to score Profar and the Padres saved the game and the series with a 3-2 win.

The Padres are done with AL play for a while and are back to the NL West as the Rockies come to town for five games, including a doubleheader on Tuesday.  First pitch tomorrow night is at 6:40 p.m.  Antonio Senzatela starts for Colorado against Mike Clevinger.