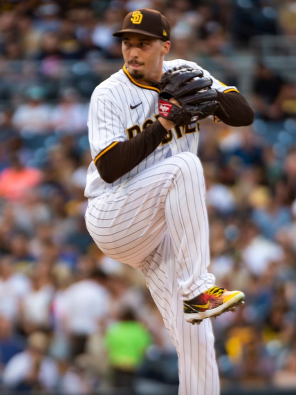 By Liz Alper
Photo:  Blake Snell pitched six innings with nine strikeouts.  Via @padres on Twitter
August 3, 2022 (San Diego) - After a fun day yesterday, the Padres went back to just one game a day with game four against the Rockies.  Chad Kuhl started tonight for the Rockies against Blake Snell.
The Padres started the fun immediately by loading the bases in the first.  Kuhl hit Jake Cronenworth with a pitch, allowing new Padre Juan Soto to score.  And then Brandon Drury, in his first game as a Padre, blasted a grand slam out of the yard and the Padres led 5-0 after one.
The Rockies got on the board in the third with a line drive sac fly to straight center by Charlie Blackmon that scored Yonathan Daza.  The Padres still led 5-1 after three.
Trent Grisham hit a long double to right center in the fourth to score Jorge Alfaro and the Padres led 6-1 after four.
Manny Machao kicked off the fifth with a deep solo homer to left and Cronenworth blasted a two-run homer to right that was just as deep and the Padres took a big 9-1 win for their series victory.
UP NEXT
The rubber game tomorrow is at 1:10 p.m.  Kyle Freeland starts for Colorado against Grossmont High alum Joe Musgrove.
TRANSACTIONS