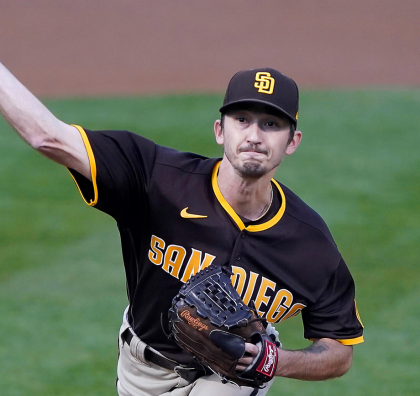 September 4, 2020 (Oakland) - After taking the series against the Angels, the Padres traveled up north for more AL West play against the Athletics.  Zach Davies started tonight’s game one against Jesus Luzardo for Oakland.

After a close call in the fourth where a call in which the As would have taken the lead was overturned, the Padres took advantage in the fifth with runners on first and second.  Trent Grisham doubled to the gap in left center to score Wil Myers.  Fernando Tatis Jr. hit a lined double off the top of the center field wall that almost left the park, but was still good for two runs.  Eric Hosmer grounded an RBI single to center to score Tatis Jr. and kick Luzardo out of the game.  He was replaced by J.D. Wendelken, who finished the inning, but not before the Padres took a 4-0 lead after five.

Tatis Jr. finally got his homer in the seventh with a solo shot to right center and Manny Machado added his own right afterwards.  His went to left center and the Padres led 6-0 after seven.