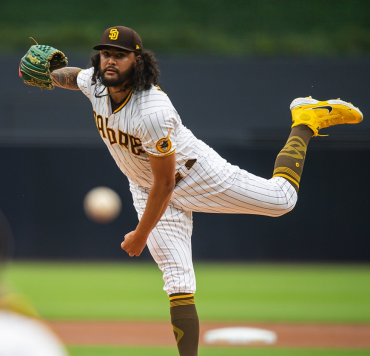 By Liz Alper
Photo:  Sean Manaea via @padres on Twitter
May 7, 2022 (San Diego) - Last night was a bit tough, but the Padres are cruising along in their series against the Marlins. Pablo Lopez started tonight’s game three for Miami against Sean Manaea.

This time, it was the Marlins that took the upper hand first with Joe Dunand’s solo homer in the third and Miami led 1-0 after three.

The Fish added some insurance with a two-RBI double by Garrett Cooper in the fifth and the Marlins led 3-0 after five.
Miami threatened again in the ninth and capitalized with Jazz Chisholm Jr.’s line drive single to right that scored Bryan De La Cruz and done was Dinelson Lamet.  Ray Kerr came in and made things a lot worse when he gave up a blast to left with the bases loaded to Jorge Soler and the Marlins snagged one from the Padres with an 8-0 win.  The Padres are shut out for the first time in 2022, but they’re still in second in the NL West.
UP NEXT
The rubber match is tomorrow at 1:10 p.m. and will be one of mlb.tv’s free games of the day for Mother’s Day.  Trevor Rogers starts for Miami against Grossmont High alum Joe Musgrove.
TRANSACTIONS