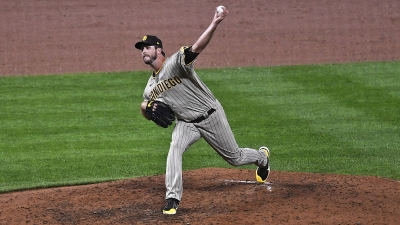 August 31, 2020 (Denver) - After a big win last night and holding the Rockies to just two runs, the Padres looked to take the series with Garrett Richards on the mound against German Marquez for Colorado.

Fernando Tatis Jr. started things in the third with a triple to center that scored two runners.  Manny Machado followed up with a sacrifice fly to score Tatis Jr. and the Padres led 3-0 after three.

Wil Myers added on in the fourth by continuing his hot streak at Coors Field with a solo home run to center. Jurickson Profar hit a bouncing ball up the middle that scored Jake Cronenworth to give the Padres a 5-0 lead after four.

Eric Hosmer added one more in the seventh with a looper to right that escaped the glove of Ryan McMahon.  Tatis Jr. scored and the Padres were able to take the series against the Rockies 3-1 with a 6-0 shutout win. The Padres stay in second in the NL West with a 22-15 record.

The Padres get a day off before heading to LA for some interleague play against the Angels.  First pitch Wednesday is at 6:40 p.m.  Dinelson Lamet starts against Julio Teheran for the Angels.