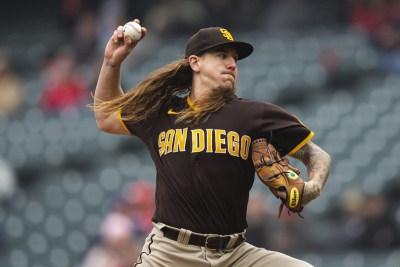 May 4, 2022 (Cleveland) - After two restful days off since yesterday’s game was postponed by rain, the Padres finished off their road trip with two interleague games against the newly-rebranded Guardians.  Mike Clevinger started game one against Zach Plesac for Cleveland.

Things got started early with Eric Hosmer’s single in the first that scored Jake Cronenworth and the Padres led 1-0 after one.

Manny Machado blasted the game open with a two-run homer in the third, to which the Guardians responded in the home half with Steven Kwan’s single that scored Luke Maile and the Padres led 3-1 after three.

But the lead soon went away as ex-Padre Josh Naylor singled in the fifth to score two and tie the game at five after five.

But the Padres prevailed.  Austin Nola doubled in the sixth to score Ha-Seong Kim, Cronenworth hit a sac fly to score Matt Beaty and the Padres led 5-3 after six.

The last run the Guardians would score was from Owen Miller, but the Padres were able to take game one 5-4.

Hosmer got things started again with a two-RBI double in the first.  Kim singled to score him and the Padres led 3-0 after one.

Once again, the only run the Guardians got was a bases-loaded walk from Jose Ramirez that scored Andres Gimenez from third.  The Padres led 3-1 after three.

The Guardians stayed close on Ernie Clement’s RBI double in the seventh that scored ex-Padre Austin Hedges and the Padres clung to a slim 3-2 lead after seven.

But in the eighth, they took charge.  Jurickson Profar doubled to score Machado and with the bases loaded, C.J. Abrams walked to score Profar, but in the home half, Miller scored on an error and Hedges singled to score another ex-Padre, Franmil Reyes.  Naylor singled to score Gimenez to tie the game at five.  No one got it done in regulation, so we went to extras again.

We lasted until the 10th when Kwan singled to score Miller and the Guardians walked it off with a 6-5 win to split the series with the Padres.

The Padres return home to host the Marlins for four games.  Game one is tomorrow at 6:40 p.m.  Jesus Luzardo starts for Miami against Nick Martinez.