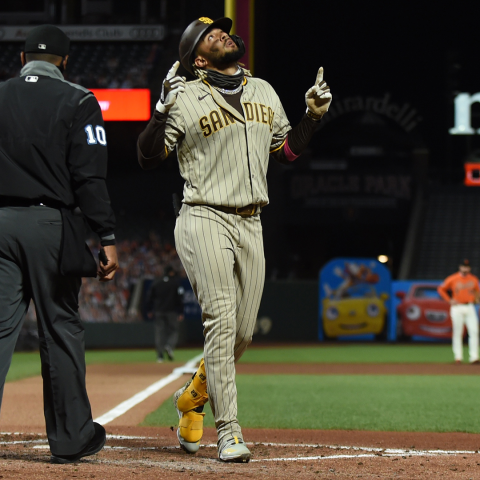 September 25, 2020 (San Francisco) - The playoff-bound Padres began the last series of the regular season with a doubleheader against the Giants.

Chris Paddack started against Tyler Anderson for the Giants.  In the second, the Padres struck first on Tommy Pham’s double to left center that scored Austin Nola and the Padres took a 1-0 lead.

But it was taken away in the home half of the second with Brandon Crawford’s solo homer to center and we were tied at one after two.

The Giants took the lead in the fourth with a solo homer off of the bleachers in left center by Wilmer Flores.  Joey Bart drove in another run with a piercing grounding single to right and Mike Yazstremski blasted a two-run homer into the San Francisco Bay that landed right in a fisherman’s net and kicked Paddack out of the game. Matt Strahm came in and finished off the inning, but the Giants led 5-1 after four.

Fernando Tatis Jr. helped the Padres get a little bit more back in the seventh with an RBI single to left that scored Jurickson Profar.  An error by the Giants on a throw to first on a Manny Machado squib scored Trent Grisham.  Eric Hosmer hit a sac fly to center that scored Tatis Jr. and the Padres were within one, 5-4, but the Giants held on and defeated the Padres 5-4 in game one.

Dinelson Lamet started against Jeff Samardzija for the Giants.  Just like in game one, the Giants struck first in the second with Evan Longoria’s sac bunt that scored Brandon Belt and San Francisco led 1-0 after two.

But Trent Grisham saved the day in the third with an RBI single to center that scored Jason Castro and we were once again tied at one.  Tatis Jr. hit the dagger with a towering two-run blast to left and the Padres led 3-1 after three.

The Giants got a run back on a Padres flub in the fourth on a bad throw to first.  It scored Alex Dickerson and the Padres led 3-2 after four.

But the lead slipped as Flores launched a three-run jack to left in the sixth to catapult the Giants to the lead once more, 5-3 after six.

But Trent Grisham saved the day with a three-run walkoff blast of his own in the ninth and the Padres saved the series with a 6-5 win.