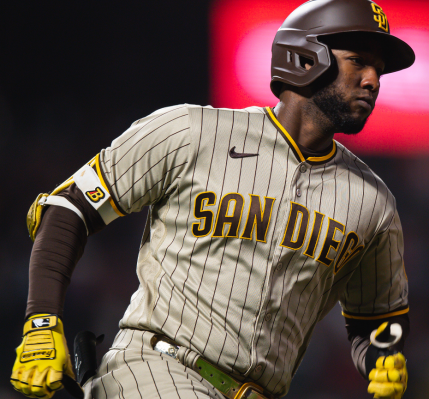 By Liz Alper
Photo:  Jurickson Profar via @padres on Twitter
September 14, 2021 (San Francisco) - The Padres suffered another embarrassing defeat last night, made even more embarrassing by the Giants clinching a postseason berth, but they tried again tonight with Jake Arrieta on the mound against Anthony DeSclafani for San Francisco.

Buster Posey kicked things off with a homer in the first that gave the Giants a 1-0 lead after one.

Jurickson Profar luckily tied it up in the third, but the Giants reclaimed the lead in the home half of the third when a pickoff attempt at first went awry and Posey got to score from third and San Fran led 2-1 after three.
Tim Hill replaced Arrieta in the fourth and did his usual routine where he comes in and gives up a run, a single up the middle by Tommy La Stella that scored Steven Duggar and the Giants led 3-1 after four.
Pierce Johnson came in in the seventh and Darin Ruf hit a line drive double to right center off of him to score Brandon Crawford and the Giants led 4-1 after seven.
Brandon Belt added more with a double to left center to score Thairo Estrada.  After a long debate regarding an error, Belt was sent home and the Giants stomped the Padres again with a 6-1 win.  The Padres fall to 74-70.
UP NEXT
Game three is tomorrow at 6:45 p.m. again.  Grossmont High alum Joe Musgrove starts against a pitcher to be named for San Francisco.
TRANSACTIONS