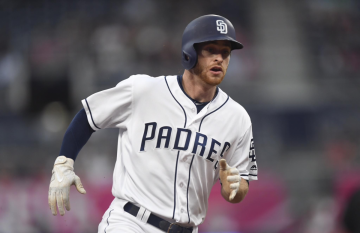 Photo:  Cory Spangenberg started the scoring with a two-run RBI double in the first.  Via @Padres on Twitter

June 28, 2017 (San Diego) - The Padres got hits last night against the Braves, but got nothing to show for it.  It’d be even tougher tonight as the man, the myth and the legend, Bartolo Colon, took the mound for the Braves against Luis Perdomo.

The Padres didn’t fool around tonight.  Cory Spangenberg hit a two-RBI double in the first to give the Padres a 2-0 lead.

Wil Myers added one more with a single in the third that scored Manuel Margot.  Carlos Asuaje added on with an RBI single that scored Myers and the Padres took a 4-0 lead.

The Padres still weren’t satisfied; they wanted revenge for last night and in the fourth, they got it.  Hunter Renfroe drove in a two-run RBI triple and the Padres were ahead by a whopping 6-0.

The Braves mounted a comeback in the sixth.  Former Padre Matt Kemp singled up the middle to drive in two and erase Perdomo’s shutout.  Phil Maton replaced Perdomo and hit Tyler Flowers with the bases loaded, so one more run came in.  Maton got Matt Adams to ground to second, but the Padres were only able to get the force at second and Adams reached first on a fielder’s choice and Kemp scored.  Maton struck Johan Camargo out to end the rally.  The Padres still led 6-4.

The Padres added a cushion when exactly the same situation happened to Allen Cordoba.  He grounded into a fielder’s choice to score Erick Aybar.  The Padres held strong to win 7-4 and even the series at one game apiece.

The series finale is tomorrow night at 6:10 p.m.  Jaime Garcia takes the mound for the Braves against Dinelson Lamet.