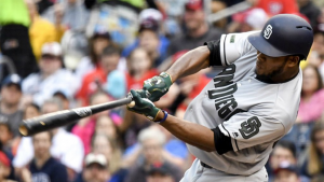 Photo:  Franchy Cordero scored the winning run in the eighth to sweep the Cubs.  Via @Padres on Twitter

May 31, 2017 (San Diego) - No matter what happens today, the Padres have won a series against the defending World Series champions.  Such an occurrence is like Haley’s Comet; it only happens once every [insert number of your choice] of years, so cherish it.  But in today’s game three, the Padres faced Jake Arrieta.  Luis Perdomo started for San Diego.  And something amazing would happen.

The Cubs started off strong with Javier Baez’s single in the second that scored Anthony Rizzo and Chicago took the lead 1-0.

But Ryan Schimpf came through again in the Padres’ half of the second with a solo homer to tie the game at one.

The game stayed knotted at one for a while until the eighth when Yangervis Solarte grounded into a fielder’s choice that scored Franchy Cordero and the Padres took the lead and miraculously swept the Cubs in three games with a 2-1 win.

The Padres get a day off tomorrow before the Rockies come to town on Friday.  First pitch is at 7:10 p.m.  will start for the Rockies against Clayton Richard.