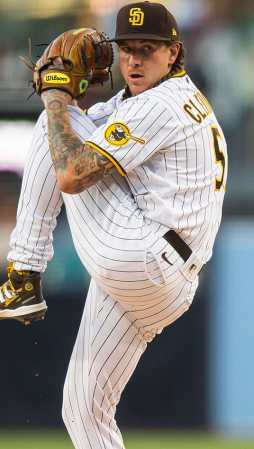 By Liz Alper
Photo:  Mike Clevinger via @padres on Twitter
June 22, 2022 (San Diego) - The Padres are, for the first time in a long time, going for the sweep today against the Diamondbacks.  But they had to get through Madison Bumgarner first.  He faced Mike Clevinger.

The Padres added more with two more runs in the second, first with Luke Voit’s single that scored Jurickson Profar and Jorge Alfaro’s fielder’s choice that scored Jake Cronenworth from third and the Padres led 6-0 after two.
Alek Thomas put the Diamondbacks on the board in the third with a solo homer to right and the Padres led 6-1 after three.
Profar lined a ball to right in the fifth to score two and the Padres led 8-1 after five.
The Dbacks got one back in the sixth on a sac groundout by Jose Herrera that allowed Pavin Smith to score from third, but Alfaro got his revenge with a gigantic solo homer to left in the home half of the sixth and the Padres led 9-2 after six.
Christian Walker kept chipping away for the Dbacks with a deep solo homer to left in the seventh, but the Padres weren’t done yet.  Azocar hit a long double to left in the home half to score Grisham and the Padres led 10-3 after seven.
The Diamondbacks got some last-minute hits in with a run from Thomas when a throw from Nick Martinez passed C.J. Abrams and went into center field, but the Padres swept the Snakes in commanding fashion with a 10-4 win.
UP NEXT
The Padres are done with the NL West for the weekend and host the Phillies.  Game one tomorrow is at 6:40 p.m.  Ranger Suarez starts for Philadelphia against Grossmont High alum Joe Musgrove.