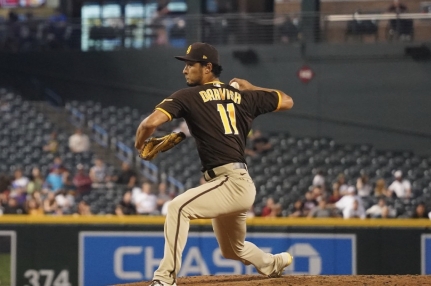 September 18, 2022 (Phoenix) - The Padres are one win away from winning a long series against the Diamondbacks.  Yu Darvish started against Ryne Nelson for Arizona.

Manny Machado kicked things off in the first with a two-run blast and the Padres led 2-0 after two.

Brandon Drury added on with a sac fly in the third that scored Jurickson Profar and the Padres led 3-0 after three.

Juan Soto knocked out his 25th homer of the season in the fifth, a blast to right and the Padres led 4-0 after five.

Jake Cronenworth hit a sac fly in the eighth that scored Machado, Soto doubled in the ninth to score Austin Nola and the Padres held the Dbacks to just one run to take the series 3-1 with a 6-1 win.

After a day off, the Padres return home to host the Cardinals.  Game one on Tuesday is at 6:40 p.m.  Adam Wainwright starts for St. Louis against Mike Clevinger.