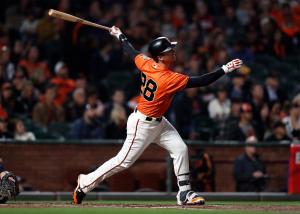 September 29, 2017 (San Francisco) - Is it over yet?  Nope, three more in San Francisco.  Jordan Lyles started tonight’s game one against Chris Stratton for the Giants.

Well, they’re already eliminated.  Might as well play like it.  The Giants scored three runs in the first.  The first came on Buster Posey’s RBI double.  The second came on Brandon Crawford’s RBI single and the third came on Pablo why-didn’t-you-do-this-in-Boston Sandoval’s RBI double and the score was 3-0 San Francisco.

Four more came in the fourth with a Joe Panik RBI double, a Posey RBI ground rule double and another two-run RBI single from crawford to make it 7-0 Giants.

Posey hit his hat trick RBI double in the sixth to give the also-eliminated Giants some dignity with an 8-0 win in game one.

The second-to-last game of the season for the Padres is tomorrow at 1:05 p.m.  Jhoulys Chacin starts against Matt Cain for the Giants in Cain’s final start in the big leagues.