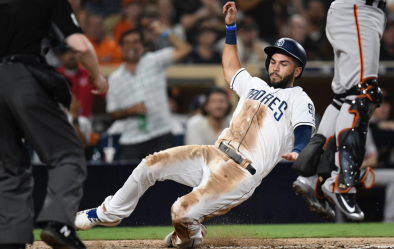 Photo:  Eric Hosmer scored the game-tying run in the eighth that would eventually be pointless in extras.  Via @Padres on Twitter

July 30, 2018 (San Diego) - The Padres were utterly embarrassed by the Dbacks yet again and pushed them out of town.  The Giants stomped in for a short two-game series.  Derek Holland started tonight’s game one for the Giants against Eric Lauer.

Lauer Lauer’d early and gave up two singles followed by a three-run home run blast to left by former Padre Chase d’Arnaud to give the Giants a 3-0 lead.

The Padres got on the board in the fourth with a skied homer to center by Hunter Renfroe, his eighth homer of the year, to get the Padres on the board to trail 3-1.

Manuel Margot got the Padres closer in the fifth with a liner to left that slipped out of the glove of Gorkys Hernandez, allowing Austin Hedges to score and get the Padres a little closer, trailing 3-2.

It looked lost, but in the eighth, Christian Villanueva came through with a double to left.  Eric Hosmer scored from first to tie the game.  We were going to extras.

But it was in vain as usual as Hernandez bounced back from the errors he’d been committing all night with a fly ball solo homer to left in the 12th and the Giants reclaimed the lead.  Buster Posey flew into a force out to center that scored Kelby Tomlinson and the Giants took game one in extras, 5-3.