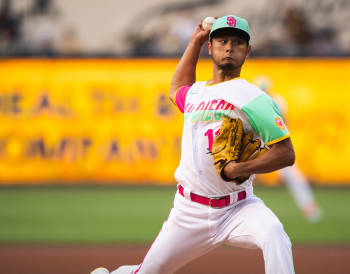 By Liz Alper
Photo:  Yu Darvish struck out nine tonight.  Via @padres on Twitter
July 15, 2022 (San Diego) - The Padres returned home after being shocked by the Rockies for one more tilt with the Diamondbacks before the All-Star break.  Madison Bumgarner started tonight’s game one against Yu Darvish

The Diamondbacks started the action with Ketel Marte’s solo homer in the first and Arizona led 1-0 after one.

But the Padres got revenge in the second with a double by Austin Nola that scored two.  Esteury Ruiz hit a falling single to left to score Nola and the Padres led 3-1 after two.
Ha-Seong Kim added more with a single in the third that scored Manny Machado and Nola grounded into a double play to score Luke Voit and the Padres led 5-1 after three.
Christian Walker brought the Dbacks closer with a two-run shot in the fourth.  Despite that, the Padres coasted to an easy 5-3 win in game one.
UP NEXT
Game two tomorrow is at 5:40 p.m.  Tyler Gilbert starts for Arizona against Sean Manaea.
TRANSACTIONS