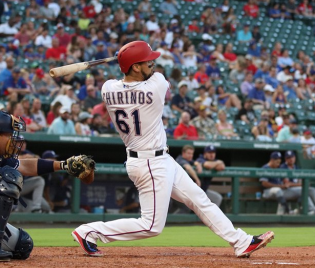 Photo:  the Padres were able to get past Robinson Chirinos' power tonight, coming back in the eighth from a 2-0 deficit that he made.  Via @Rangers on Twitter

June 26, 2018 (Arlington) - The Padres are starting to do that thing they used to do last year when they would get the lead and then immediately let it go and lose.  It’s happened for the past two games, but tonight, they tried to stop it with Tyson Ross on the mound against Austin Bibens-Dirkx for the Rangers.

It ended up not starting out so well.  Rougned Odor golfed a solo home run to right in the second for a 1-0 Rangers lead.

Robinson Chirinos added more in the fourth with the second solo blast of the game, a towering fly ball to right center, giving the Rangers a 2-0 lead.

The Padres had a chance to put up some runs in the fifth with the bases loaded, but of course flunked worse than an already-failing high school student, but it was okay because the Rangers did the same thing.

The Padres eventually did get on the board in the eighth with Wil Myers’ RBI double to left that scored Travis Jankowski to cut the lead in half.  Christian Villanueva hit a sac fly to left to score Eric Hosmer and, in the opposite scenario of what’s been happening the past two days, the Padres were the ones coming from behind to tie the game.  Hunter Renfroe did the honors with a line drive RBI double to left that scored Myers to put the Padres ahead.  They’d hold on to win 3-2 and even the series at one game apiece.