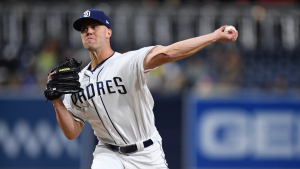 May 30, 2018 (San Diego) - The Padres’ series with the Marlins is tied at one game apiece.  Tonight, the Padres tried to take a series lead with Jose Urena on the mound for Miami against Clayton Richard.

It was scoreless until the fourth when Starlin Castro blasted a two-run bomb to left center to put the Marlins on top 2-0.

Franmil Reyes hit a monster home run last night.  He did it again tonight in the home half of the fourth with a another blast up and away to right to cut the lead in half to 2-1.

Everything looked hopeless until the bottom of the ninth.  Bases were loaded after Freddy Galvis’ single.  Hunter Renfroe came off the bench and stepped up to the plate.  He hit a hopper to short.  The tying run came home, but J.T. Riddle threw to first and Yadiel Rivera couldn’t make the catch, another run came in and in an exciting finish, the Padres walked it off with a 3-2 win to take two games in the series.

The rubber match is tomorrow at 6:10 p.m.  Wei-Yin Chen starts for Miami against Jordan Lyles.