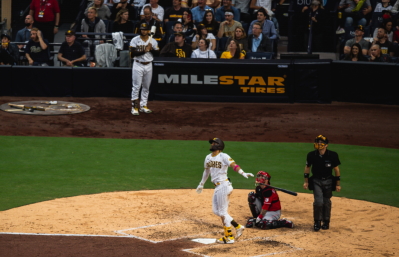 By Liz Alper
Photo via @padres on Twitter and Rebecca Jefferis Williamson
June 17, 2021 (San Diego) - Imagine getting swept by the last place team in your division.  Can’t relate!  Well, maybe we can.  But the Padres were back home now in a full capacity Petco Park taking on the Reds for the weekend.  Wade Miley started game one of the four game series tonight against Grossmont High alum and Padres sole no-hitter owner Joe Musgrove.

It remained deadlocked until the sixth, when Fernando Tatis Jr. welcomed fans back to Petco with a solo blast to left center and the Padres led 1-0 after six.

Manny Machado added on with a towering solo homer to left in the seventh to give the Padres  2-0 lead.
In the ninth, the fans started to feel like parents embarrassed that their kid is in public with chocolate all over their faces as the Reds started a rally.  Joey Votto scored on a sac groundout.  Tyler Stephenson looped an RBI single to center to score Scott Heineman.  And last but not least, Jonathan India launched a two-run homer to left to give the Reds a beautiful, shocking come-from-behind 4-2 lead. 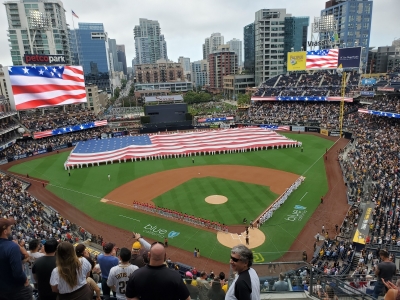 Photo, right by Rebecca Jefferis Williamson
But in the home half of the ninth, Eric Hosmer saved the day with a two-run game-tying blast to right. The fans definitely got their money’s worth tonight.  So did I; I had three concluding sentences written, but had to change them because things kept happening.  But Victor Caratini allowed me to finally write the last one with his towering two-run bomb to left that sealed the deal for the Padres and allowed them to walk it off on Opening Day 6-4 and take game one.  They move to 39-32.
UP NEXT
Game two tomorrow is at 7:10 p.m.  Tony Santillan starts for Cincinnati against Chris Paddack.
TRANSACTIONS