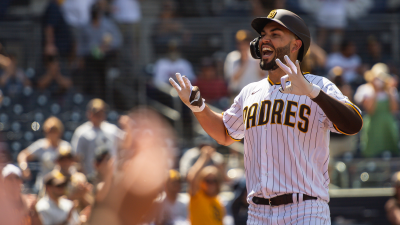 Photo: Eric Hosmer had three RBIs on the day to help the Padres to victory. Photo via @padres on Twitter

April 1, 2021 (San Diego) - Opening Day is here!  And that’s not an April Fool’s joke.  The Padres finally opened their season against the Arizona Diamondbacks.  Madison Bumgarner started for Arizona against Yu Darvish.

The Dbacks scored the first runs of 2021 with a single from Asdrubal Cabrera that scored Ketel Marte and Arizona led 1-0 after one.

Eric Hosmer added one in the third on a home run to right, his first of 2021.  Myers followed up with his first home run, a blast to left for back to back Padres home runs.  Caratini added his third RBI of the game with a line drive to left that scored Jake Cronenworh and a massive third gave the Padres a 5-1 lead after three.

Hosmer added another RBI on a chopped double to right that scored Fernando Tatis Jr. and the Padres held a 6-1 lead after four on Opening Day.

The Diamondbacks got a run back in the fifth on Marte’s solo homer to center.  Cabrera brought the snakes even closer with a two-run blast to right to kick Darvish out of the game.  He was replaced by Tim Hill, who got one out before Tim Locastro put the nail in the coffin with a two-run homer to left to tie the game.  Stephen Vogt gave the Dbacks the lead again with a solo homer to right and Arizona led 7-6 after a wild six-run fifth inning.

Hosmer saved the day again in the sixth with a single up the middle that scored Tucupita Marcano to tie the game at seven after six.

After a Cronenworth leadoff triple in the seventh, Jurickson Profar hit a sac fly to reclaim the lead for the Padres.  They were finally able to carry an 8-7 lead to the end of what was a very wild Opening Day game and start the season off right with a victory.

The Padres continue their series against the Dbacks tomorrow at 7:10 p.m.  Merrill Kelly will start for Arizona against Blake Snell.