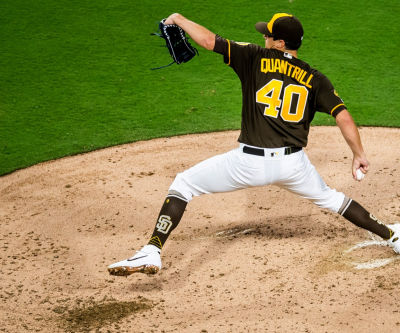 Photo: Cal Quantrill pitched a stellar game, going seven innings, gave up five hits, no runs, no walks, no earned runs and struck out five. Via @Padres on Twitter

August 9, 2019 (San Diego) - After a good win last night, the Padres took the field for game two against the Rockies.  Kyle Freeland started for Colorado against Cal Quantrill.

The Padres started the action in the third with who else but Fernando Tatis Jr.’s two-RBI double to the gap in center for a 2-0 Padres lead after three.

Wil Myers added more in the fifth with a single to right to score Luis Urias to go up 3-0 after five.

The Padres added the nails in the coffin in the eighth with Urias’ fielder’s choice RBI that scored Eric Hosmer.  Josh Naylor came in to pinch hit and launched a three-run home run to right. The Rockies got one run in the ninth, but the Padres take game two 7-1.