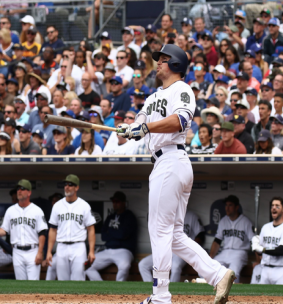 May 29, 2017 (San Diego) - The Padres returned home today to face the reigning world champion Chicago Cubs and are hopefully still riding the momentum from a win yesterday.  Kyle Hendricks started on the mound for Chicago against Jarred Cosart.

If you thought the Padres were going to stand a chance against the Cubs, ECM asks “why?”  In the first, Jason Heyward singled and scored two to give the Cubs a 2-0 lead.

But Cosart did his job to hold them to that and in the fourth, it paid off.  With the bases loaded, Hunter Renfroe creamed a grand slam to left field and the Padres were catapulted to a 4-2 lead over the reigning champs.

They added more in the fifth when Wil Myers grounded into a fielder’s choice and Miguel Torres scored and the Padres won game one 5-2, giving them a huge wave of momentum against the 2016 Series champs.