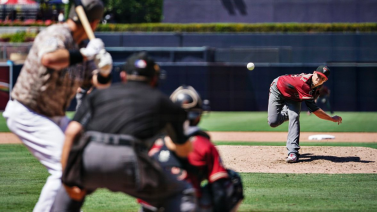 July 29, 2018 (San Diego) - The Padres are looking to get swept by the Dbacks today, but they’ll still try to save face.  Clay Buchholz started for Arizona against Joey Lucchesi.

The Dbacks struck quickly.  Paul Goldschmidt launched a two-run homer off the Western Metal Supply Co. building in the first for the Dbacks to take a 2-0 lead.

Wil Myers played his usual role of Padres Avenger in the third with a skied double to left center off the low wall that scored two to tie the game.

The Padres started a rally in the sixth with a liner to left to score Eric Hosmer to make it 5-3.

Freddy Galvis added the Padres’ last run on a strange play; he lined a ball off the top of the wall in left.  Christian Villanueva was initially tagged out at home, but after a review, he was ruled safe and in a twist of not-as-bad-as-it-could-have-been, the Padres were swept 5-4.

The Giants come to town next.  First pitch is at 7:10 p.m.  Derek Holland starts for San Francisco against Eric Lauer.