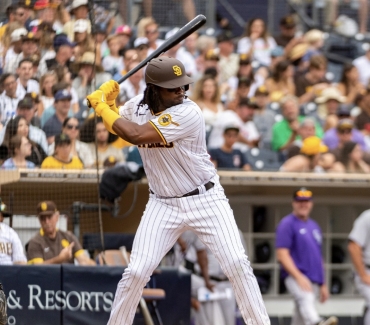 August 4, 2022 (San Diego) - Five games is a lot, but the Padres have been phenomenal and are on their way to sweeping the Rockies.  Kyle Freeland started today’s finale for Colorado against Grossmont High alum Joe Musgrove.

The Rockies took advantage with a double from Ryan McMahon in the third that scored two and Colorado led 2-0 after three.

José Iglesias doubled in the fifth to score Brian Serven.  McMahon launched a three-run homer to end Musgrove’s day.  He was replaced by Nick Martinez, who got the final out, but the Padres trailed 5-0 after five.

Both teams got last-minute runs in in the ninth.  Iglesias singled to score Sam Hilliard. Manny Machado singled to score Nola in the home half, but the Rockies prevailed, avoiding the sweep with a 7-3 win.

The Padres head up north two hours for a weekend series with the Dodgers.  Game one on Friday is at 7:10 p.m. and might also be seen on MLB Network.  Sean Manaea starts against Tony Gonsolin.