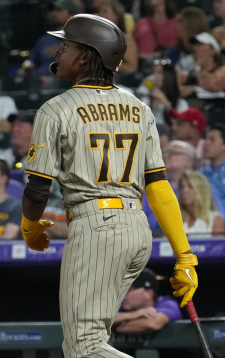 By Liz Alper
Photo via @padres on Twitter
July 13, 2022 (Denver) - The series with the Rockies is tied at one game apiece.  Tonight, the Padres tried to take the lead with Grossmont High alum Joe Musgrove on the mound against Chad Kuhl for Colorado.

Jake Cronenworth hit a solo homer to start the scoring in the first and the Padres led 1-0 after one.

The Padres added more with the bases loaded in the fifth, as Eric Hosmer walked to score Cronenworth from third.  Ha-Seong Kim was walked by Jhoulys Chacin to score Manny Machado from third, but the Rockies fought back in the home half with a double to left from Connor Joe that scored Sam Hilliard.  Garrett Hampson scored on a fielder’s choice by Jose Iglesias.  Joe scored on a sac fly to center from Brendan Rodgers and we were tied at three after five.
Cronenworth reclaimed the lead for the Padres in the sixth with a double to left that scored Trent Grisham.  Nomar Mazara hit a slow dribbler to left that scored Cronenworth.  Hosmer singled to score Machado, but it all went away in the home half again with a game-tying three-run blast to left by Iglesias and we were tied at six after six.
The Rockies finally got their first lead in the seventh with a single up the middle from Hilliard that scored Elias Diaz.  With the bases loaded, Iglesias hit a ground ball single to left that scored two  and the Rockies led 9-6 after seven.
Diaz grounded into a sac double play in the eighth that scored Ryan McMahon and the Rockies took a 2-1 series lead with a 10-6 win.
UP NEXT
The rubber game is tomorrow at 12:10 p.m.  Blake Snell starts against Kyle Freeland for Colorado.
TRANSACTIONS