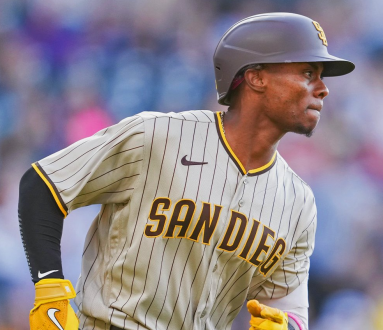 By Liz Alper
Photo via @padres on Twitter
July 12, 2022 (Denver) - The Padres barely won last night and we all know what happens when that happens:  they lose the next night.  Hopefully, that wouldn’t be the case tonight.  Mike Clevinger started against Austin Gomber for Colorado.

Ha-Seong Kim started the scoring in the second with a double that scored Nomar Mazara and the Padres led 1-0 after two.

But the Rockies tied it up in the fifth with an RBI single up the middle by Garrett Hampson that scores Yonathan Daza and we were tied at one after five.
The Rockies jumped out in front in the sixth with Charlie Blackmon’s three-run homer to left and Clevinger’s night was done.  He was replaced by Nick Martinez, who got the final two outs, but the Rockies led 4-1 after six.
Jose Iglesias added more in the seventh on a fielder’s choice.  The throw home was too slow for Sam Hilliard, who beat out the throw and increased the Rockies’ lead to 5-1 after seven.
Mazara helped out a little bit with a looping RBI single to center in the eighth that scored Jorge Alfaro.  Esteury Ruiz grounded a single to right that scored Mazara, but the Rockies split the series at one apiece with a 5-3 win.
UP NEXT
Game three is tomorrow at 5:40 p.m.  Grossmont High alum Joe Musgrove starts against Chad Kuhl for the Rockies.
TRANSACTIONS