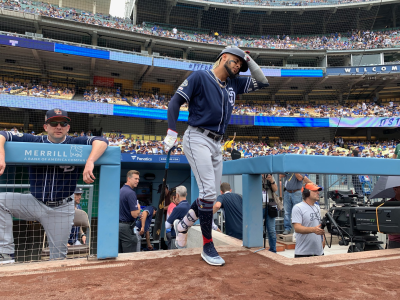 Photo: Fernando Tatis Jr. had a solo home run and a three-run bomb, making this his first career multi-home run game. Via @Padres on Twitter

July 7, 2019 (Los Angeles) - The Padres have had a string of terrible games, including getting swept by the Giants badly.  They’re back in LA now and have won their last two games against the Dodgers and would try to take the series today with Joey Lucchesi on the mound against Ross Stripling.

Fernando Tatis Jr. kicked things off immediately in the first with a leadoff solo homer to straightaway center to give the Padres a 1-0 lead after one.

Manuel Margot added on with a solo homer of his own, also to straightaway center, in the second to put the Padres up 2-0.

The Dodgers got on the board in their half of the second with Max Muncy’s solo blast to left to cut the Padres’ lead to 2-1 after two.

After a few errors by Muncy in the fifth, Tatis Jr. made him pay with a three-run blast to left.  The Padres led 5-1 after five.

Justin Turner tried to help out with a solo shot to left to break up Lucchesi’s 10-in-a-row retired streak in the sixth.  The Padres still led 5-2 after six.

The Dodgers crept a little closer with a single up the middle in the seventh by Alex Verdugo that scored Edwin Rios and finally kicked Lucchesi out of the game, but the Padres were able to hold on and win the series 3-1 with a 5-3 win.

The Home Run Derby and All-Star break!  The Padres will be back in a week.