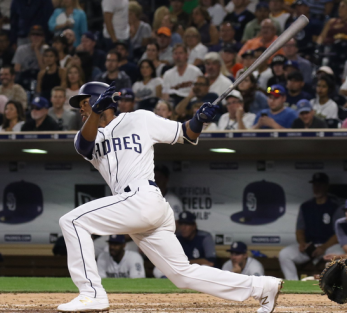 Photo:  Manuel Margot was phenomenal on both sides of the plate tonight, but his three-run blast in the fourth gave the Padres the lead that would turn into the win.  Via @Padres on Twitter

August 29, 2017 (San Diego) - The Padres were silently put down by the Giants last night, with two homers giving the boys from the bay a 3-0 win.  The Padres tried again tonight against Matt Moore for the Giants against Luis Perdomo.

The Giants threatened in the first, but they wouldn’t tally until the second when Moore singled to score Joe Panik and Denard Span hit an RBI double to score Nick Hundley and the Giants led 2-0.

Cory Spangenberg put the Padres on the board with a single in the home half of the second that scored Wil Myers and cut the lead to 2-1.

Revenge was the Padres’ game to be had as they seized it in the fourth with two monster home runs.  First, a game-tyer by Jabari Blash and then a three-run monster shot by Manuel Margot.  The Padres suddenly found themselves in front 5-2.

The Padres added more in the sixth with Carlos Asuaje’s RBI single that allowed Spangenberg to come 90 feet for a 6-2 lead.

Panik tried to start a rally for the Giants in the eighth with a solo homer, but the Padres shined in probably their best game of the season offensively and defensively in a 6-3 win that evened the series at one game apiece.

No Wednesday matinee this week; the rubber match is tomorrow at 6:10 p.m.  Ty Blach starts for the Giants against Travis Wood.

The only plate in baseball is home plate which has five sides. I thought everyone knew that.