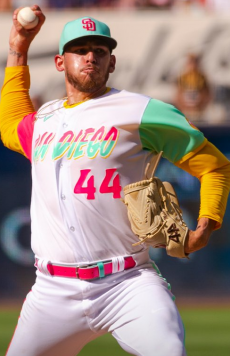 By Liz Alper
Photo:  the Grossmont High alum had eight strikeouts in six innings.  Via @padres on Twitter
July 30, 2022 (San Diego) - The Padres rebounded nicely last night with a big 10-1 win over the Twins.  They tried to take the series tonight with Sonny Gray on the mound for Minnesota against Grossmont High alum Joe Musgrove.
Things started off okay.  Manny Machado hit a solo homer in the third to give the Padres a 1-0 lead after three.
But Byron Buxton tied it in the fourth with a solo homer of his own and we were tied at one after four.
Gilberto Celestino gave the Twins the lead in the fifth with a single that scored José Miranda and Minnesota led 2-1 after five.
Carlos Correa widened the gap in the eighth with a two-run homer to straightaway center.  The Padres bombed on an inning-ending double play when a ball skipped off of Eric Hosmer’s glove into the dugout, allowing Buxton to score.  Miranda hit a line drive double to right to score Kyle Garlick.  Nick Gordon hit a high ground rule double to left that scored Miranda and tonight, it was the Twins’ turn to leave the Padres in the dust as they evened the series with a 7-4 win, thanks to Jurickson Profar’s three-run blast to right in the ninth.
UP NEXT
The rubber match is tomorrow at 1:10 p.m.  Dylan Bundy starts for Minnesota against Sean Manaea.
TRANSACTIONS