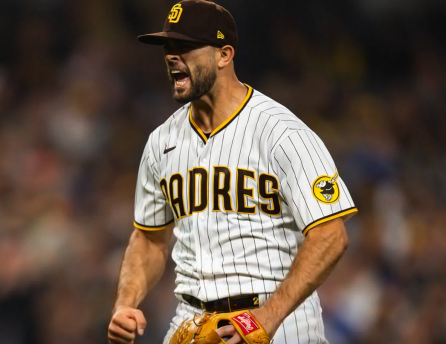 By Liz Alper
Photo:  Nick Martinez via @padres on Twitter
May 5, 2022 (San Diego) - Fittingly, the Padres returned home on Cinco de Mayo to host the Marlins for four games.  José Luzardo started tonight’s game one for Miami against Nick Martinez.

Manny Machado welcomed the Padres home in the first with a solo homer and the Padres led 1-0 after one.

But the Fish came right back in the third with Jesus Aguilar’s RBI single that scored Miguel Rojas and we were tied at one after three.
Machado did it again in the fourth with another solo homer and that was all the Padres needed to secure the 2-1 win in game one.
UP NEXT
Game two tomorrow is at 6:40 p.m. and will be one of mlb.tv’s free games of the day.  Sandy Alcantara starts for Miami against Yu Darvish.
TRANSACTIONS