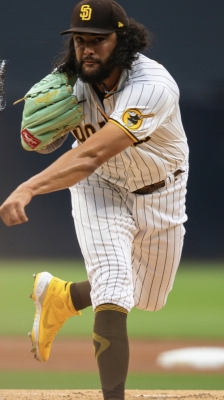 July 16, 2022 (San Diego) - The Padres finally got back on the winning track last night against Arizona.  They tried to take the series tonight against Tyler Gilbert for Arizona against Sean Manaea.

We were scoreless until the fourth when Buddy Kennedy tripled to score Jordan Luplow and the Dbacks led 1-0 after four.

Carson Kelly extended the lead with a two-run blast in the fifth, but Matthew Batten got the Padres on the board in the home half with a double that scored Trent Grisham.  The Diamondbacks led 3-1 after five.

But Luke Voit saved the day in the sixth with a three-run blast and the Padres found themselves in front with the 4-3 win to even the series.

The rubber game–and last game before the All-Star break–is tomorrow at 1:10 p.m.  Merrill Kelly starts for Arizona against Mike Clevinger.