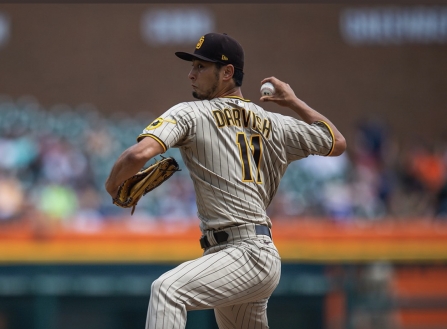 July 27, 2022 (Detroit) - The Padres got lucky last night, giving up the lead in the ninth and coming away with an extra innings win.  Today, they went for the series win with Yu Darvish on the mound against Tarik Skubal for Detroit.

The Tigers got on the board first with Jeimer Candelario singled in the first to score Javy Baez and Detroit led 1-0 after one.

But the Padres took advantage in the fourth with Luke Voit’s sac fly that scored Jake Cronenworth and Ha-Seong Kim’s single that scored Manny Machado.  The Friars led 2-1 after four.

Jurickson Profar singled in the seventh to score Kim and it looked sealed again, but in the ninth, the Tigers got revenge for last night with Victor Reyes’ game-winning double that scored two and the Tigers walked off the game and the series with a 4-3 win.

The Padres get a day off before their first homestand of the second half, hosting another rare American League opponent in the Twins.  First pitch Friday is at 6:40 p.m.  Joe Ryan starts for Minnesota against Blake Snell.