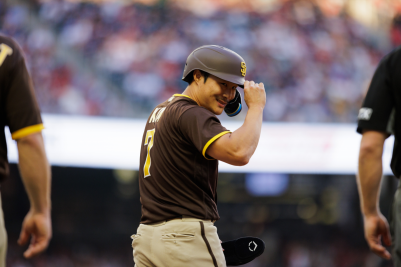 By Liz Alper
Photo:  Ha-Seong Kim's three-run homer gave the Padres their final lead of the night.  Via @padres on Twitter
May 13, 2022 (Atlanta) - The Padres are back on the road on a three-city swing, starting this weekend in Atlanta.  Yu Darvish started tonight’s game one against Max Fried for Atlanta.

The Padres kicked things off in the third with José Azocar’s sac fly that scored Ha-Seong Kim, but William Contreras tied the game in the home half with a solo homer and we were tied at one after three.

The Padres regained the upper hand in the fifth with Eric Hosmer’s single that scored two, but the Braves stayed close with Dansby Swanson’s single in the bottom of the fifth that scored Adam Duvall and the Padres led 3-2 after five.
Wil Myers extended the lead with a homer in the sixth to left, but Duvall singled in the home half to score Ozzie Albies.  Swanson catapulted the Braves to the lead with a massive three-run homer and Atlanta led 6-4 after six.
The Padres got the lead right back in the seventh when Kim hit a three-run homer of his own and the Padres led 7-6 after seven.
Myers added insurance in the ninth with a sac fly that scored Hosmer.  Trent Grisham sealed the deal with a huge double to left that scored three and the Padres took an exciting game one with an 11-6 win.  They’re in second, a half a game back of the Dodgers.
UP NEXT
Game two is tomorrow at 1:05 p.m. and can also be viewed on FS1.  Sean Manaea starts against Charlie Morton for Braves.
TRANSACTIONS