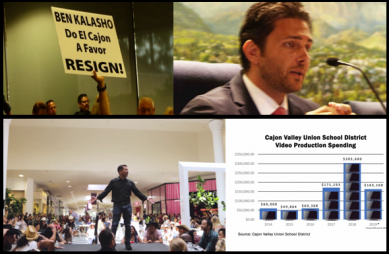 August 17, 2020 (San Diego’s East County) – East County Magazine has won first and second place awards in the Society of Professional Journalism San Diego Pro Chapter’s 2020 Journalism Awards.  A list of awards was released today, except for special awards, which will be announced on August 24.

ECM editor Miriam Raftery and contributing editor Paul Kruze co-authored both of this year’s winning entries, which were both entered in the daily reporting and writing division.

“Insane work. Way to stay on it despite the threats,” one SPJ judge commented.  This story was also part of a series on Kalasho’s ethical and legal scandals honored at last year’s San Diego Press Club Awards.

In the Education category, ECM took second place for “Cajon Valley School District Spends Over a Half Million Dollars on Promotional Videos.” The money, spent over the five years since David Miyashiro became superintendent, was many times more than neighboring school districts spent on promotional videos and the district was unable to provide documentation to prove any financial revenues reaped as a result of these lavish expenditures. The article was one of several documenting controversial actions taken by the CVUSD district.