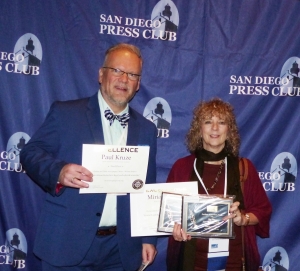 Kruze and Raftery received a third place award for their series on a serious subject, titled “Councilman Kalashos legal and ethical scandals.”  The series included:

“The San Diego Press Club Excellence in Journalism Awards celebrates professionals whose research, writing, reporting, and visual skills shed light on topics that matter to us all,” said Karyl Carmignani, 2019 Press Club president. “I am proud of our organization uniting journalism and public relations professionals, while providing career-enhancing programs and fun mingling opportunities for our members.”

The most awards went to the San Diego Union-Tribune (25), followed by Times of San Diego (24). Southwestern College ha the most winners in the college news division (17). Ken Stone received the most individual awards (20).

In addition to the presentation of journalism writing awards, two college students were presented with scholarships at the event. They included: Bella Ross, San Diego State University, $2,500 Joe Lipper Scholarship; Chad Hunter Francis, San Diego City College, $1,500 scholarship from the San Diego Press Club Foundation. Ross has written for SDSU’s Daily Aztec newspaper and served as an intern with the San Diego Union-Tribune. Francis served as an anchor and reporter with ITV Cable 16, which is operated by the County Office of Education.