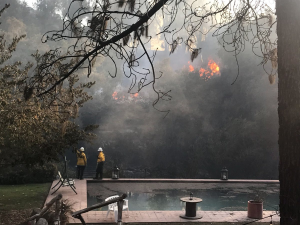 July 8, 2018 (Alpine)—The grim toll wrought by the 505-acre West Fire in Alpine has risen. With the wildfire now 92 percent contained and all evacuations lifted, reentry brought relief for some who found homes still standing, but heartache for others facing total devastation.

The fire destroyed at least 56 structures, including 34 homes, a business, and 21 other buildings including barns and sheds.  Another 15 homes were damaged, along with 5 outbuildings.

Merlyn Cochran, assistant manager at Baron’s Market, was at work  when the fire started. Neighbors Al and Sharon Haven told Cochran and her husband to “go get my mother-in-law, who is 96 years old and lives at our ranch, because the winds were shifting and blowing towards our ranch,” Cochran recalls.

Her husband and sister-in-law were able to save his mother. Meanwhile, Cochran found a way around a barricade and reached her home on Highlands View Road. “I saw our yard already on fire,” she recalls, adding that the air was too smoky to see homes on an embankment above.  “I got my wedding ring and iPad. By then firefighters were in my house and told me to leave.” 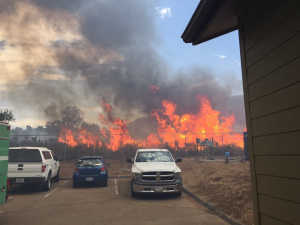 The house was on fire, from pine needles fallen on the roof.  Cochran followed her sister-in-law out and thought her husband was behind her, only to soon realize he wasn’t.  She parked her car in the middle of the street and ran back, finding her husband in the backyard, fighting to douse flames on a burning fence with a garden hose.

“I yelled at him to leave, but he wouldn’t,” she recalled. “He said he would save our house." She asked firefighters for help, and they convinced him to leave.

“We returned to Baron’s,” she said in an interview on Saturday afternoon.  The grocery store was soon filled with displaced residents and hungry firefighters.  The store provided sandwiches, salads, snacks and rotisserie chickens free to both residents and firefighters.

Her husband later went home, where fortunately he found the home still standing, though a fence and trees were burned. He stayed there Friday night, after looters were reported in the area.

“One thing that saved us was that after the 2003 Cedar Fire, we put on a concrete roof,” said Cochran, who had been at the store for two days as of Saturday afternoon when we spoke with her; she declined to have her photo taken.

But their neighbors, Albert and Sharon Haven, were less fortunate. Their home was completely destroyed, posts on their social media sites by friends indicate.  The loss was confirmed by CBS reporter Monique Griego, who posted on Instagram that Sharon had lived in the home since she was 9 years old. The family home was lost in the flames, along with all of the couple’s photos and mementos.

“Despite going through something so horrible, their family came down from Los Angeles to celebrate Al’s 88th birthday,” the reporter posted at Casa Guadalajara restaurant. “They were seriously the sweetest couple.”

The Havens are prominent Alpine residents. Al Haven is the former superintendent of the Alpine Union School District. Sharon formerly headed up the Alpine Education Foundation. Both have been active in a variety of local charities.

Lauren and Ed King had just moved to Alpine. They lost their home on Suncrest and all of their family photographs, escaping the fast-moving fire with only their dog, 10 News reports. But when they returned to find their dream home reduced to rubble, one small miracle brought a smile: a jewelry box, apparently saved by firefighters, had been placed outside on the patio. Inside was all of Lauren’s jewelry—including a locket with a photo of her baby boy, now 30. 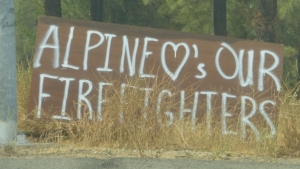 “No one gets used to seeing the devastation and knowing people are returning to nothing,” Cal Fire Capt. Kendall Bortisser said, UT San Diego reports. “This was one of those times that firefighters just couldn’t get in there and defend every home, and it hurts.”

Despite heavy property losses,no deaths have been reported, though one firefighter was injured.

It could have been far worse, many here agree, voicing gratitude to the firefighters. (Photo, right, by Miriam Raftery.)

Greg Dunne, author of the “Produce Picks” column for East County Magazine, was cooling off at Starbucks when we caught up with him (photo, left by Miriam Raftery).  An avid hiker, he says he and his son had been considering going hiking in Cleveland National Forest, where the fire started on Thursday before reaching residential areas in Alpine.

“We were almost on the Pacific Crest Trail,” he reflects, noting that they might well have been incinerated when the fire roared through.

For those who suffered losses, a Local Assistance Center will open Monday at the Alpine Library and will operate from 9 a.m. to 6 p.m. until further notice. Representatives from county agencies and other organizations will be on hand to help residents begin the rebuilding and recovery process.

Resources are also available at https://www.sdcountyrecovery.com/ or by calling the Recovery Resources hotline at (858) 495-5200.