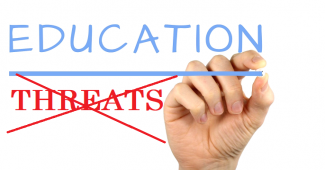 October 27, 2021 (Washington D.C.) – Following a rise in complaints by school board members, teachers and school workers over threats of violence, harassment and intimidation, U.S. Attorney General Merrick Garland announced plans to convene a meeting with federal, state, local and tribal law enforcement leaders to create strategies for addressing this trend.

In a press release, the Dept. of Justice also encouraged education officials to report threats to the FBI’s National Threat operations Center tip line at 1-800-CALL-FBI or via the FBI website at http://fbi.gov/tips. “Threats against public servants are not only illegal, they run counter to our nation’s core values,” Garland states. “Those who dedicate their time and energy to ensuring that our children receive a proper education in a safe environment deserve to be able to do their work without fear for their safety.”

Republicans have criticized Garland for setting up what they term a “snitch line on parents” and seeking to suppress free speech. But in testimony to the House Judiciary Committee, Garland made clear that he has no intention of targeting free speech, which he said is “totally protected by the First Amendment…We are only concerned about violence and threats of violence against school administrators, teachers, staff.”

In response to the Dept. of Justice announcement, Congressman Darrell Issa, a Republican from the 50th district which includes San Diego and much of East County, introduced the “Stand With Parents” resolution.