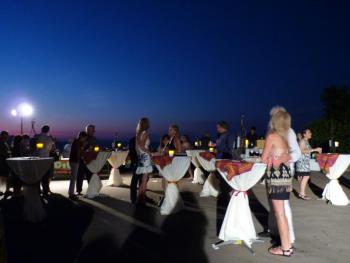 Tickets are on sale for the Eighth Annual heART of Mt. Helix held at East County’s most recognizable landmark, the memorial cross and historic amphitheater atop Mt. Helix. The Park is pleased to announce Tom Karlo, KPBS General Manager, will serve as the Master of Ceremonies for this Park fundraiser.

The sunset event will be held on August 15 from 5:30 pm to 10:00 pm and will feature vignettes by local performing and visual artists. After enjoying the 360 degree view and listening to two stages of local musicians perform, guests can dance under the stars to the Mighty Untouchables, a well known San Diego band. Mt. Helix painters Nora Clemens, Debi Nicols, Roz Oserin, Penelope Quirk, and Wood Turner Sally Ault will each be demonstrating their technique to showcase the variety of visual arts talent in East County.

The event will also include a selection of wines and craft beer from Ballast Point Brewery. Henebery Whiskey and St. Petersburg Vodka will be offering tastings. A variety of interesting auction items will be available including a 10-day cruise for two on Holland America Lines. Proceeds from the event will be used to preserve and enhance Mt. Helix Park and Amphitheater which receives no government funding yet is open to the public daily.

Tickets are $50 for general admission with prices going up after August 1. Tickets can be purchased online at www.mthelixpark.org or by calling 619-741-4363. The event is expected to sell out.