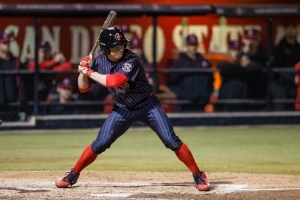 March 25, 2019 (San Diego) - Behind a three-run eighth inning and a lights-out performance by Daniel Ritcheson out of the bullpen, the San Diego State baseball team posted a 6-4 comeback win over Arizona at Tony Gwynn Stadium on Monday night. The Aztecs improve to 14-9 on the season, while the Wildcats fall to 13-11.

Trailing 4-3 heading into the bottom of the eighth, Joe Fitzhugh kick-started the late-inning rally with a one-out double. Fitzhugh advanced to third on a Ryan Orr groundout and later scored on a Matt Rudick single cutting through the left side of the infield to knot the score at 4-4.

During the late-inning comeback, Ritcheson was lights-out for the Aztecs on the mound, posting an inning-ending strikeout to leave the bases loaded in the bottom of the eighth before striking out the side in the ninth to close the game.

Ritcheson earned his first win of the season, allowing just one base runner over 1.1 innings pitched and recording all four of his outs via strikeout.

The scoring started early for the Aztecs and Wildcats, as the teams traded first-inning home runs with Arizona third baseman Nick Quintana hitting an opposite-field solo home run in the top of the first and Casey Schmitt hitting his third home run of the season in the bottom half to give the Aztecs a 2-1 lead.

Jarvis drove in Rudick on a double down the left field line in the bottom of the third to extend SDSU's early lead to 3-1. The Wildcats eventually erased SDSU's early deficit, scoring single runs in the fifth, sixth, and eighth.

Making his first collegiate start, Brian Leonhardt went 3.1 innings with four runs, one run and one walk allowed while striking out five.

SDSU finishes a five-games-in-five-day stretch tomorrow at 6:00 p.m. against California Baptist. The game will air on XTRA 1360.