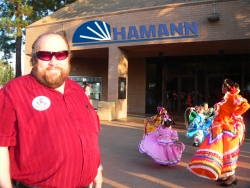 The mayor then smashed open a bottle of champagne on the newly-christened “Sycuan Civic Center,” which will feature slot machines and an Aladdin-themed motif for taxpayers ready to gamble on their hometown’s future. “Governor Schwarzenegger terminated anti-gaming laws by executive order when we offered to do a three-way split on profits with our cash-strapped state, our city, and the tribe,” added the Mayor, pulling out a roll of quarters. “I’m hoping for a jackpot!” 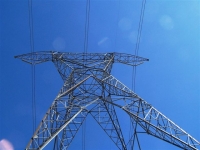 The thoroughfare formerly known as Main Street has been renamed “Sempra Way”, in honor of SDG&E’s parent company. As an added bonus, the utility giant revealed that it has negotiated approval from the PUC to reroute Sunrise Powerlink down the middle of Sempra Street.

“Seeing as so many businesses in downtown El Cajon have already closed up during the recession, we decided to divert Powerlink from all those Alpine and Lakeside residents stressing about business closures, scenic views and fire safety. Instead, we will run our high-voltage power-towers proudly down Sempra Street,” SDG&E representative Meg A. Bucks stated.

“Their loss is our gain,” Mayor Lewis said of the neighboring communities. “With the hefty donations made by Sempra, Hamann and Sycuan, El Cajon will now have plenty of money to fix potholes and avoid cuts to fire and police services."

"Next up," he revealed, "I’m negotiating for return of Krispy Kreme doughnuts so we generate enough revenues to really afford to take a bite out of crime. To show our recognition and entice more corporate donors to bail out El Cajon, we’re also adopting a new slogan: `the best small town money can buy.’”