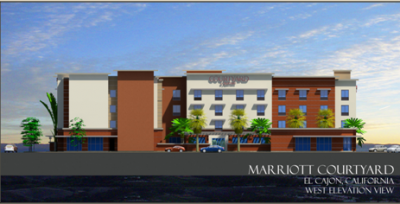 “This is special to the city,” City Manager Doug Williford  said, then provided background. In Spring 2012 the Council held a special workshop on two interrelated topics: a hotel and the East Count Performing Arts Center(ECPAC).

Initially, the idea was to tear down ECPAC and put a hotel in its place. But after community objections, Council voted not to tear down ECPAC, but instead to preserve and renovate it. An architect has been in the process of ECPAC’s renovation for the last two weeks. ECPAC is expected to re-open next year.

The second directive from the Council to staff was to pursue a hotel partner, which was done with Excel Hotel Group and Marriott Hotel.  About six months ago, Council approved an exclusion negotiation agreement with a tentative tax sharing plan that will be “consummated in the not so distant future in a longer term development,” the City Manager stated, adding, “It has been a long time to get here. The partners have been outstanding to deal with.” He added that this region needs a hotel—and deserves it.

Planning manager Anthony Shute then presented a PowerPoint presentation with information about the hotel, which is proposed along North Magnolia, Rea Street, and Civic Way.  If built, it will be the first hotel in downtown El Cajon. The proposed project is four stories high with two commercial retail space areas, a community, a café, and on-site alcoholic  beverage service. View the presentation here.

“We found no significant environmental effects,” Shute said of the commercial area property.  Surrounding properties include City Hall to the east, the police station to the north, the courthouse just east of City Hall, and retail services.

The only speakers were those from Excel Hotel Group and the architect himself. No one voiced opposing views. 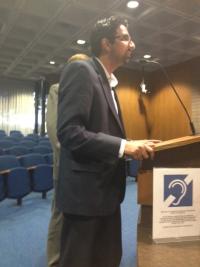 After Mayor Bill Wells opened up public testimony, Neil Patel (photo, right) from Excel Hotel Group spoke.  Wells commented that he was “very impressed” by the renderings, adding, “I think everybody here wants to tell you how excited we are about this project.”

Patel  said that Excel Group, Marriott and the developing team are also enthused.  El Cajon Courtyards has a strong affiliation for business travelers as well as leisure guests, he said.  “I think it’ll do very well in this type of community based on the Santee sports complex plus all the little businesses in East County. And when we were presented with the opportunity several months ago, we jumped at it not only because we thought it was a good investment, but also because we, my family, grew up in East County so we know this area very well.”

Wells told him the timing is ideal. “El Cajon is really in the middle of a renaissance right now. We’ve seen more businesses than we probably ever seen before,” he stated, adding, “There’s an excitement in the air. We’re becoming one of the main places for family friendly community type involvements. Right now, I think you’ll find that this is a good place to do business. We’re looking forward to a long partnership and relationship.”

Patel agreed and said the companies have done a lot of work with cities both in California and elsewhere, such as Austin, Texas. He said the El Cajon staff has been “easy, good people to work with” in expediting the process. “I think together we’ll be a good team.”

Next, the project architect, Bob Tuttle from RF Tuttle and Associates,  shared his views, confirming Patel’s statement that working with El Cajon has been “a breath of fresh air paired with many of the other communities we typically work in.”  He said he is looking forward to a “great project.”

Mayor Pro Tem Gary Kendrick commented, “This is the biggest thing to happen in El Cajon since building Parkway Plaza 40 years ago.” Council then approved the CEQA exemption and conditional use permit.

Next up, the hotel developer will complete final architectural plans and building permits and submit them to city staff for approval. Once plans are approved and permits issued, the old vacant buildings will be demolished and the new hotel will be constructed. The project is expected to be completed by late 2015.