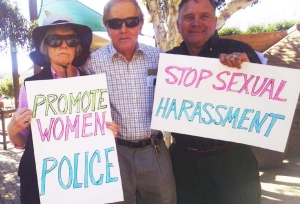 March 26, 2015 (El Cajon) – At the El Cajon City Council meeting on Tuesday, several members of the public spoke out to ask that Officer Richard Gonsalves be fired or put on administrative leave pending outcome of a lawsuit by a woman claiming sexual harassment.  Gonsalves has been demoted, but remains on the force.