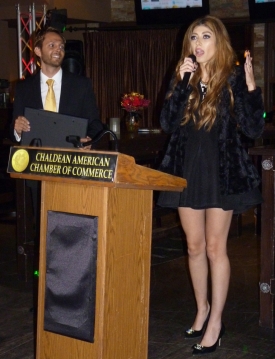 Judicial finding that Kalashos engaged in cyber-harassment, defamation and other intimidating actions comes within days of ECM reporter Paul Kruze filing a police complaint alleging that Councilman Kalasho threatened him with an attack dog and defamed him on social media.

Photo: Ben and Jessica Kalasho at  a Chaldean American Chamber of Commerce event, before the U.S. Patent and Trademark office forced them to change the name of the organization due to trademark infringement.

July 6, 2018 (El Cajon) – Superior Court Judge Timothy Taylor has issued a judgment granting a motion  filed by beauty pageant contestants and a taco shop owner against El Cajon Councilman Ben Kalasho and his wife, Jessica. The ruling allows documents and a supporting declaration  submitted by plaintiffs’ lawyers to be admitted as facts at trial and  most damning, orders evidence of the following admissions to be submitted  at trial as true facts--meaning the Kalashos cannot dispute the accuracy of these findings in court: