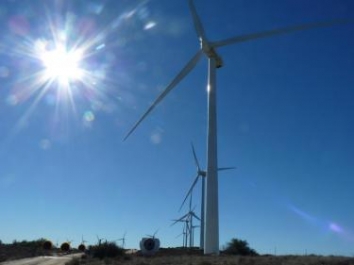 County denies request for health impacts of turbines, even as more are proposed

Photo: New proposed turbines would be much taller and produce more energy than these older Kumeyaay Wind turbines, also broadening the areas that could be impacted by noise, vibrations, and electromagnetic interefence with devices such as cell phones

December 6, 2018 (Campo) –Tonight, the Bureau of Indian Affairs will hold a scoping meeting on a notice to prepare n environmental impact statement for a proposal to build 60 wind turbines up to 586 feet tall (taller than the highest skyscraper in San Diego) on the Campo Indian reservation. The meeting will be held at 6 p.m. at the Campo Tribal Hall, 36190 Church Road (BIA 10) at highway 94 in Campo.  Written comments can also be submitted by December 21st. Find details at www.CampoWind.com.

The new Campo Wind project is proposed for most Campo reservation ridgelines from north of I-8 to the U.S./Mexico border, each 4 megawatts.  Neighbors and the Boulevard Planning Group have raised concerns over the large turbines including noise, sleep disruption, health impacts and lost property values.   View flyer.

Minutes of the Boulevard Planning Group meeting from November 1, 2018 reveal numerous residents’ complaints about problems reportedly associated with similarly large-scale wind turbines recently installed at the Tule Wind project in McCain  Valley as well as turbines at the Kumeyaay Wind facility in Campo. Those complaints range from noise and vibrations to interference with cell phone service, a vital concern in an area prone to wildfires where communication is critical.