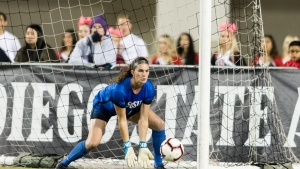 Elve, the reigning Mountain West Offensive Player of the Week, scored her sixth goal of the season to earn San Diego State (8-7-1, 7-2-0 MW) its fourth win in a row, its longest winning streak of the year.  In the last three games Elve, a native of Huntington Beach, Calif., has four goals on just five shots, including two game-winners.

In the 92nd minute, with the game tied 1-1, the Aztecs had a goal kick.  Brooke Lisowski hammered a ball two-thirds of the way down the field.  It disappeared into a group of players and then reappeared on the foot of Elve outside the 18. She drove to her left and took a left-footed shot which sailed over the Fresno State keeper and in for the deciding goal.

In the first 20 minute of the game, it looked like there was no way this one was going to extra time.  SDSU came out and dominated the run of play early on and came up with the opening goal in the 11th minute.

After a save by Bulldogs starting keeper Valentina Vivas, she made a sloppy clearance to her left which came right to Aztec Jessica Sanders, inside the 18.  Sanders played the ball to Taylor Moorehead who was crashing into the six and Moorehead sent it home for the 1-0 advantage.  It was Moorehead’s fourth goal on the season and the freshman Sanders’ first assist and first point as a collegian.

Things were looking good for SDSU, they had six shots and a goal in the first 20 minutes, but for the remainder of the half Fresno State (9-5-2, 5-3-1 MW) took over the run of play.  They outshot San Diego State 5-to-2 in the final 25 minutes of the period, but still trailed 1-0 at the intermission.

In the second half, the flow continued to favor Fresno State, which found the equalizer in the 51st minute.  Off a corner to the far post, Fresno State’s Robyn McCarthy headed the ball back to the near post where Emma Chivers bodied the ball in off her chest to tie the game at 1-1.

The score remained the same for the rest of the second half and though Fresno State controlled the majority of the possession, they weren’t able to generate any real chances to score.

The Aztecs had several of opportunities in the second half, but were offsides on three occasions, where a player got open behind the defense.  In the 89th minute, SDSU nearly put the game away.  Elve picked up a ball near the left side of the midfield and played a perfect pass to a driving Chloe Frisch.  Frisch used her speed and the ball angle to get behind the Bulldogs defender and in one-on-one on the keeper.

Milena Zink who came on in goal at the start of the second half, stormed off her line and got just enough of the Frisch shot to save the game for her team…but only for a couple of minutes.

Elve would strike on the team’s first shot in overtime and put SDSU in a virtual tie with Boise State at the top of the MW table.  The win also punches the Aztecs ticket to the Mountain West Tournament, which is scheduled to begin on Nov. 5, in Boise, Idaho.

Moorehead paced the San Diego State offense with five shots and a goal.  Fisch attempted four shots and Elve took two which included the game-winner.  Phoebe Leitch, Jordan Girman and Sarah Broacha produced a shot each.  Brooke Lisowski made one save in earning her eighth win on the season.

Fresno State was led by McCarthy’s three shots and Zink made three saves but took the loss.  She is now 2-2-1.

“We played well early and got a goal out of it,” head women’s soccer coach Mike Friesen said.  “That was one of the things that we didn’t get early in the season.  We created those chances but were never rewarded for them.  We created a number of chances early on and that sustained us tonight because we were not at our best in this game.  I thought we had tired legs and Fresno State did a good job in how they were pressing us, and we didn’t solve it very well.  The only way to win a championship is to grind out some wins. You are not going to play well every night and the mark of a team that can win a title is one that can do it when you are not at your best.  I think we confirmed that we are one of those teams tonight.”